ClusterCS is proud to announce the v2.0 update is finally here. At ClusterCS, we value our customer’s feedback and the new update brings customer requested features, quality of life changes and various bugs fixes.

This year we are giving developers more tools to help them focus more on coding and less on preparing their work environment. The pricing plans have been simplified as well.

It’s a long list of updates, so please, bear with us until the end of the article to find out what awesome features you have at disposal to automate and manage your processes and what’s coming up in the near future.

Automate your development workflow. Create and migrate between live and development environments while working under the same website URL. ClusterCS can keep track of files and databases and automatically update configuration files with environment specific values.

You have the option to Clone, Merge and Push updates for your domain at a press of a button! GIT support is integrated as well for DevOps purposes. 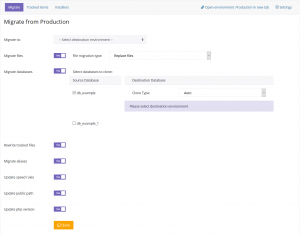 You can now see the major services running on your server (eg. apache, nginx, lighttpd, postfix etc) with the option to Stop/Restart/Start them directly from our Control Panel, without having to access the server. This will remove time spent in the terminal and give you better control over what’s happening on a server-level.

ClusterCS recommends the use of SSH keys for accessing your server as a more secure alternative to key-phrase passwords.

You can now manage the SSH keys registered for your domain directly from our Control Panel. This feature allows you to also access GIT for the Development Environments (Dev Env) with ease.

Also this makes it easier for your Project Manager to restrict developers access to the server. 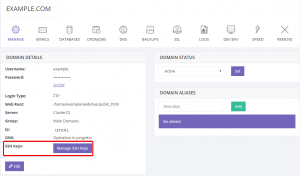 We’ve been working behind the scenes to modernize our development stack in order to improve the speed we’re delivering features to our customers and increase the reliability of our codebase.

To achieve this goal, new features have been developed on a new Vue 2.0 stack. You can already see this new codebase in action when using our new awesome features.

This feature has been requested by our customers on many occasions and we have worked initially on a list of the most popular PHP scripts. 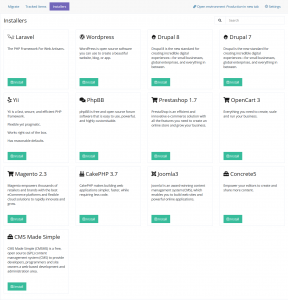 PHP-FPM is a PHP FastCGI implementation that is highly customizable compared to other PHP implementations (mod_php and su_php specifically) allowing you to fine tune its performance targets. It is part of the core PHP install since PHP 5.3.

One downside of PHP-FPM is that it doesn’t scale well if you have tens of websites on your server. If you’re not sure what’s best to use, don’t hesitate contacting us.

ClusterCS is a remote management panel which means it connects to your servers remotely through SSH to execute configuration changes, monitoring commands and service repairs. Traditionally, ClusterCS acted as simple remote entity executing commands through the SSH standard shell. Due to various connectivity issues that can occur with with the standard SSH connection the execution of commands can sometimes be interrupted, delayed or lost all together. Complex monitoring and restart scenarios had to be developed to cover such cases.

In order to resolve these issue we have developed an independent agent (ccsRemoteAgent) which gets installed on the managed server to facilitate communication. The ClusterCS management infrastructure continues to establish a SSH connection to the server but this time it’s only to establish a secure communication channel with ccsRemoteAgent. Instead of executing commands directly through the SSH channel, those commands are now being sent to the ccsRemoteAgent which takes care of running the necessary commands in a local environment without any external interference. This stabilizes the protocol, enables rapid detection of SSH failures and commands are not interrupted by re-connection events.

On top of the secured SSH link between ClusterCS management infrastructure and extra encryption layer with public/private keys is enabled on the communication protocol to secure against any local hacks or attack trying to compromise ccsRemoteAgent execution capabilities.

We’ve worked together with our customers and based on their feedback and market demand, the pricing has been simplified.

To make things clean from the start, existing customers can keep their preferred pricing. If it’s more advantageous to switch to the new pricing plan, please contact us to make the necessary adjustments.

We are keeping the Free Plan as is, and removing the Professional and Business plans.

The new licensing scheme includes individual purchase of licenses for single server setups or cluster server setups. This allows you to buy single server licences for $7/month or cluster server license for $30/server/month with the ability to scale up/down as needed. Don’t forget that we offer full assistance in setting up clusters so please don’t hesitate to contact us for any support that you may need.

You can now use PHP’s latest versions on your server. Remember that you have the ability to have different versions for each domain. Use this in conjunction with the new Development Environments to do A/B testing internally to check performance differences or any bugs that might appear due to a version change.

⦁ Improved setup speed due to new RPM based builds

We’ve migrated more packages to use RPM based builds when using our predefined recipes for server setup or when adding custom services to your build while keeping the standard configuration options.

This should help a lot when you’re trying to experiment with various setups on a low RAM VPS or cloud solutions as compiling packages is a resource intensive operation.